When I was a kid, I HATED quiche. I have no idea why. Maybe the quiche I tried back then was improperly prepared or contained ingredients that I didn’t like. Whatever the reason, the word “quiche” had a negative connotation in my mind even into my adulthood.

Until lately, that is.

My husband and I have 6 sussex hens. Which means, typically, we are blessed with 6 beautiful, fresh eggs on a daily basis. This makes for tasty, healthful eats, but it also overwhelms us with eggs. So I began researching egg recipes.

Among some recipe cards that I received from friends and family for our wedding (which I happened to stumble upon after we moved to our new home), I found a recipe for Bacon Quiche. I immediately thought, Yuck! But I glanced over the ingredients anyway. Pie crust. Bacon. Eggs. Cheese. Hey, this didn’t sound so bad!

Shortly after discovering this recipe, I experimentally made it. I did edit the recipe quite a bit, based on the understanding I have from working with food on a professional basis. And, instead of making a big pie, I decided to make it more convenient for us adults and more fun for our sons by making them mini.

The result surprised both me and my husband. The mini bacon quiches were delicious! Plus, since I used all-natural, organic, one-ingredient foods (including whole spelt flour in lieu of all-purpose flour for the crust, although you can use all-purpose flour if you’d rather; and bacon purchased directly from a farmer), it was actually pretty healthful!

The result was a moist and flavorful dish that my husband and son (and I!) thoroughly enjoyed. Plus, the compact, individualized size of each mini quiche makes it perfect for potlucks or to prepare as edible gifts. 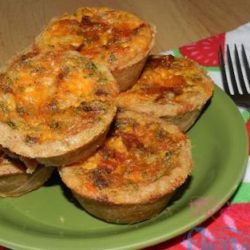