This masterpiece is a traditional recipe that has been in my hubby’s family since he was a kid. I’ve been told it originated in an old cookbook. It has become a family favorite and it is being passed on to the next generation (our kids, nephews, and nieces) as well.

Since we have been trying to live on a healthful, whole foods diet, I decided to swap some of the ingredients for this family favorite recipe with ingredients that are unprocessed. I used freshly ground whole wheat flour and natural sweeteners. Then, because I wanted to share it with you, I also gave it a couple of tweaks–namely, some cinnamon and some incredibly yummy bacon!

The cinnamon you probably get. The bacon, maybe not. I have come across many people who find the maple and bacon marriage to be weird, or who think it’d be gross. But trust me, maple and bacon are like the perfect couple. The crispy saltiness of the bacon adds texture and really enhances the sweetness of the maple.

This recipe does require a little bit of a tutorial (for my fellow visual learners especially). Now, I didn’t get pictures of every single step (forgot and/or thought it wasn’t totally necessary). But I’ll explain the process so you know where I’m at with everything.

After making the dough as described in the printable recipe below and after it has risen for the first time, punch the dough down. Then, split the dough into three even balls. Roll out one of the balls into a 12-inch wide circle. Transfer to the lightly buttered pizza pan awaiting (or the giant cookie pan like what I prefer to use). Brush with 1/3 of the melted butter then sprinkle with 1/3 of the topping. Repeat with the remaining two dough balls, stacking them until you have three buttered and topped layers. Next, place a small glass in the center of the top layer and press just enough to leave a circular indentation (my picture was at a bad angle–it really was centered even though it doesn’t look like it). Set the glass aside. Twist each wedge (or “arm”) twice.

Allow the twisted up pastry to rise for the second time, bake, then drizzle with the glaze and top with crispy bacon. I made this specific maple nut twist (as pictured) in celebration of my husband’s 30th birthday because he doesn’t like cake. This pastry goes great by itself, topped with ice cream, or served for brunch dessert alongside coffee.

Now, if you’ve embarked on the Trim Healthy Mama diet as I have, this recipe is just a big fat no. But I won’t tell if you enjoy a couple of bites (not that I did that or anything…*cough*). 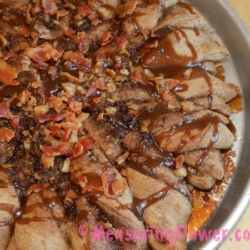