Something that I miss are those little round, flat, yellow, plastic discs commonly sold by the diaper pails at discount stores and baby super stores. They’re the diaper pail deodorizers. I gave them up a long time ago after learning that they were chemically laden and terrible for the human body (and for pets’ bodies, for that matter) when inhaled or even touched.

After giving up those unhealthful deodorizing discs, the smell of dirty diapers has definitely emulated in the room where the changing table is. I’ve tried getting rid of the smell by burning plain or naturally scented candles, by putting baking soda in the diaper pale and the deodorizing compartment, and various other natural deodorizing methods.

But nothing worked very well. Some of them did squat. A few helped reduce the smell a little bit. Then, as I delved into the world of essential oils, I discovered a little gem. It was one of the bottles that accompanied the Everyday Oils collection in my Young Living Premium Starter Kit.

This little gem is one of Young Living’s incredible essential oil blends that they have appropriately dubbed Purification. Purification is a mixture of citronella, lemongrass, rosemary, melaleuca (i.e. tea tree), lavandin, and myrtle essential oils. It is useful for reducing and eliminating odors (as well as killing germs) of all kinds including:

Diaper pails of course is what really piqued my interest. So, to bring relief to my overactive pregnant nose I put it to the test.

I placed about 5 drops of Purification on a cotton ball and put it in the deodorizing compartment of our diaper pail.

Ahh! The Purification oil smells amazing. And guess what? It totally worked! Within a day, the yucky smells has completely dissipated.

Oh, and did you know that you can further eliminate odors using Purification oil by making your own all-natural homemade Febreeze? Here’s the recipe! 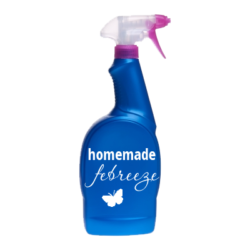