I have recently found a deep, sincere love for all things coconut. Coconut oil. Coconut sugar. Coconut flour. Coconut is like super fruit. So many things come from it or its tree and they are packed full of nutrition. Plus, coconut flour is both gluten free and Trim Healthy Mama approved.

Well, I had the desire to make my Tuscan Chicken Pot Pie, but being on the Trim Healthy Mama weight loss plan (as well as trying to go gluten free to see how it helps, especially for the pain in my legs caused by my bulging disc), my usual yet tasty Buttery Basic Pie Crust recipe could not be used.

So I began experimenting with my basic pie crust recipe, subbing the whole wheat flour with nutritious, gluten free, THM-approved coconut flour (and pretty much completely changing the recipe in the process).

I must admit that this recipe is pretty good! It’s perhaps not *as* flaky as some traditional crusts, but still flaky nonetheless. And it tastes great–I couldn’t really tell that it wasn’t regular pie crust once the filling was in it.

Another thing to note about this recipe is that it yields ONE pie crust. This means it makes just enough to line the bottom of one single pie plate. If you need more than one crust, obviously, you want to double it. If you need just one pie crust plus some crust to top the pie (such as for chicken pot pie), then make the recipe 1-1/2 times.

This recipe freezes well! I usually press the dough into round discs, wrap tightly in plastic wrap, put in a glass airtight container, then pop on the freezer. I’d say it probably lasts up to 6 months in the freezer. To use, thaw the dough and go.

And one last thing. The dough might crack a bit while you’re trying to roll it out. Keep your rolling surface and the top of the dough well-dusted with additional coconut flour while rolling it. And if it cracks apart, just press it back together. I actually found it was easier to just press the crust into the bottom of the pie plate rather than mess with rolling it out (although if you’re putting a cap crust on, it’d probably be easier to roll it out–just be patient with it). 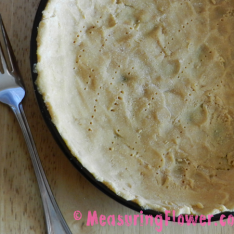